Everyone who has watched "Say Yes to the Dress" knows about the expected "ah-hah" moment in the bridal dress salon. You know the one… after trying on dress after dress that she hates, finally — on the verge of having a nervous breakdown — the bride tries on the one perfect dress. She sobs at her beauty, as does the entourage, and maybe even the bridal consultant. Teary-eyed and aghast, she realizes that, out of the thousands maybe even millions of wedding dresses out there, this is her perfect dress.

As I sat in the bridal boutique, dressed in a gown, that I really liked, I waited for it… that moment of joy to wash over everyone in the store, and for me magically and tearfully to be transformed into a bride.

Everyone agreed, I looked pretty. But there were no tears, no declarations that I had to have this dress. I didn't feel anymore like a bride than I did the moment before I stepped into the dress.

I could picture myself in this dress on my wedding day, but, I also knew that I couldn't say for sure that this was "the one." After all, there were thousands if not millions of dresses out there, which makes it very probable that there was somewhere out there a dress I liked better.

I didn't have long to make up my mind, though. The dress was an out-of-date sample, and on clearance, marked down over 80% — which was important because my fiancé and I are on a very tiny budget — which also meant that if I didn't get it now, I might not ever get it.

I have sworn off all wedding-related things. Or, at least, things not related directly to my wedding. This includes TV shows, magazines, The Knot, and... Read more

But without the cheers, shouts, and tears, saying "yes" almost seemed like a failure. Would I be doomed to a lifetime of regret and staring at pictures wishing, if only I had bought another dress?

Then I had a reality check. What did it matter if there were other dresses out there that I might like better? I liked this one.

And in the end, I reminded myself that I could wear a potato sack and would still be gleefully happy on my wedding day and all the other extra stuff, was just that, extra stuff. I wanted to marry my fiancé. I didn't care if I was a model, or a pretty-pretty princess, or whatever else TV told me I should be.

Don't get me wrong: months later I am still gleefully happy with my dress. I made the right choice for me. I didn't need some special moment to validate my decision. They might make for good television moments, but in the end some teary-eyed declaration of love for an inanimate object is the least of my concerns.

Did you cry when you found your dress? If not, how did you know it was "the dress" without the reality TV moment? 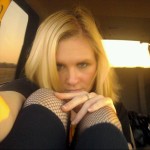 In short, I’m the typical struggling writer trying to survive in this funny little world.

Why you should ignore trainwreck wedding reality shows

Why reality tv is missing the boat with non-traditional weddings

How to shop for a wedding dress like a software engineer

Should I shop for a wedding dress before I'm engaged? Why one bride says no

Thinking of having a backyard microwedding? Here's your inspo

How to have a romantic polyamorous triad wedding

NEW FROM THE PUBLISHER OF OFFBEAT BRIDE

DO YOU FEEL LIKE YOU'RE ALWAYS CHASING YOUR PARTNER?
Ever feel like you're clingy, or have this nagging sense of being "too much" for your partner? If so, you might be dealing with anxious attachment… Take my quiz to see if anxious attachment is fucking with your wedding planning.
♥ Ariel, publisher of Offbeat Bride.
PS: I believe in you.

Thinking of having a backyard microwedding? Here's your inspo

How to have a romantic polyamorous triad wedding

Should your parents pay for your wedding? Why one bride says NO THANK YOU