Back in 2010 my boyfriend of six-and-a-half years popped the question, and I said yes. Then my sister decided to get married two months before we planned on getting married, and since my parents were paying for both weddings, they asked us to wait. So we agreed. Then my brother decided to get married the next year. And then I got pregnant. And then we were raising a child and dealing with my huge decline in mental health and trying to get me help.

After three years, we finally started to figure out what we wanted to do for our wedding. Throw a big party? Throw a small party? Run away? Ugh, they all sounded hard and not right.

I felt like most people thought, "Oh finally. They already have a kid, just get hitched already!" It was no big deal. We were essentially already married in most ways, just not legally. So I wanted our wedding to be special for us, and not be bogged down with anxiety, and feeling like no one was as happy as I wanted them to be.

We are both introverts who hate being the center of attention. My panic disorder makes it even harder for me to want to be around a ton of people and the center of everything, even if it is just family. And then to top it all off, being a girl who loves romance and books and movies… I felt like the media shows families and friends being oh-so-very-excited, and thrilled, and over-the-top when two people are going to get married. And I didn't feel that way.

So we sat down and focused on us. We talked about what would make us the least anxious while still making my parents happy. The biggest thing that helped me decide was that every other way that my mom, my fiancé or I came up with on "how to do our wedding" made my anxiety bloom, and I just could not fathom planning it. I stopped trying to come up with ideas and figuring it out.

The one thing that kept sticking was pseudo eloping. And I could picture myself planning it without freaking out.

After two failed attempts at planning weddings Emily & Benj decided to do the next best thing: elope! So they took their soon and ran... Read more

My mom performed the ceremony. Our son held our rings. In Illinois, you don't need witnesses. It was just the five of us (plus our amazing photographer), in a large county park.

We did compromise and throw a wedding party for extended family about six weeks later, but it was a small compromise. We got to spend our special day happy and in love and not worrying about anyone else.

Who else is struggling with the social anxieties and community expectations? What are y'all doing about it? 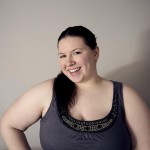 I'm Kendra, I'm a Wellness Mentor and Guide for creative women. I'm also a mama, photographer and writer. I live with my family of three in the Chicago suburbs where we dream of traveling full-time in an RV. I love coffee and nature (but hate bugs, they ruin it for me), I am zombie obsessed and love fantasy novels (but romance novels are forever my guilty pleasure). I am enthralled with gemstones and crystals and think birds are beautiful but terrifying.

NEXT
Sloths, snitches, and fingerprints: Shiny and sparkly things for your Valentine

This Oregon micro-wedding with a $31 dress casts a spell

Proposing to my introvert boyfriend: the most empowering moment of my life

Introvert wedding reception ideas: have fun with NO DANCING

This Oregon micro-wedding with a $31 dress casts a spell

Proposing to my introvert boyfriend: the most empowering moment of my life

Introvert wedding reception ideas: have fun with NO DANCING

A booklover's library wedding (with special appearances by Sonic the hedgehog)